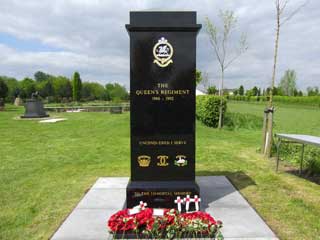 Some 250 members of the Regiment, their family and friends looked on as the Memorial was dedicated by The Right Reverend John Kirkham MA, Bishop to the Forces. Following the dedication 30 Officers and Senior NCOs enacled the Silent Toast Ceremony after which all present raised their glasses to all those who had served in The Queen's Regiment.

Dedication Service at the NMA 2016 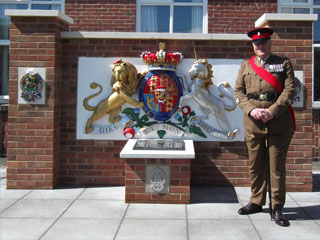 The memorial was first dedicated on Sobraon Day, 10 February 1995. It stood outside Regimental Headquarters until the closure of Howe Barracks in February 2015 when it was moved to Leros Barracks.

It was rededicated by Canon Paul Kerr of Rochester Cathedral on 3 May 2015.

The central royal cypher originally sat above the entrance to the Officers' Mess, Wemyss and Infantry Barracks, Canterbury and was later displayed in the original Queen's Regimental Museum before being incorporated into this memorial.

The QRRA was set up under the Queen's Regimental Association for all Queensmen and is open to all Battalions (with a minimum service 3 years).

Did you miss the last
One Aim Rally?

Catch the highlights and join us at the next one for another great weekend!

To find out more about what we do, visit our website