Medals are only issued by the Ministry of Defence (MoD) Medal Office and can be claimed retrospectively and by next of kin.

You can get an Armed Forces Veterans Badge if you’ve served in any of the UK armed forces - there's no fee.
You’ll need to give as much information as possible, such as:

Fill in the application form below (June 2015)

Send the form by post, fax or email to the Ministry of Defence Medal Office - the address is on the form.

(You may also apply for one replacement using the same form, if your badge has been lost or destroyed) 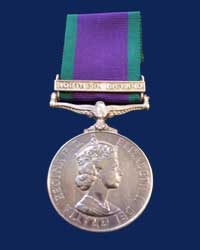 Introduced in 1962 to replace both 1918 and the naval general service medal.

Awarded to personnel of all services for at least 30 days peace duties between 1969 up to present day.

This medal can be engraved. 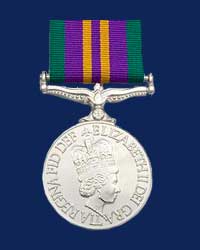 To be awarded the ACSM 2011 an individual must hold a qualifying operational medal such as the GSM (e.g. Northern Ireland, Air Ops Iraq), an OSM (e.g. Sierra Leone or Afghanistan), the Iraq Medal or other specifically designated multinational campaign medals, have completed more than 24 months (720 days) campaign service and be serving on or after 1 Jan 08. Bars are to be awarded for each additional period of 720 days approved operational service. A month is defined as 30 days and part months may be accumulated.

Those eligible to receive the medal include living holders of the Victoria Cross and George Cross and members of the Royal Household, as well as people who have been working in a number of front line public service jobs for five full calendar years on 6 February 2012.

Members of the Armed Forces;

Emergency services personnel in paid service, retained or in a voluntary capacity who face the prospect of dealing with emergencies as part of their conditions of service; 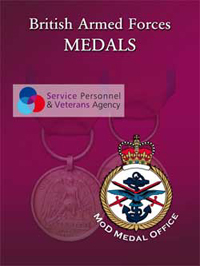 BBC News
"A man who attended a Remembrance Day parade with medals he wasn't awarded has been ordered to do community service for his deception...
Article link

You may wear the medals as next-of-kin of deceased on the right breast, by way of respect & remembrance.

'Official' medals are those for which Her Majesty, or her predecessors, has given approval. Only these medals are permissible for wear on a service uniform.
'Commemorative' medals are those which have been produced by organisations or private medal companies to commemorate particular branches of service or areas of operations. These should be worn on the opposite side to Official Medals.